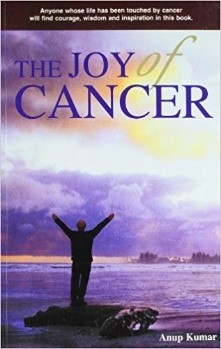 “It has ironical that in the face of death, I began, for the first time, to really live.”

By the time Anup Kumar discovered he had cancer, it had already advanced to the last stages and he was told he had four months to live. The Joy of Cancer is the outcome of the emotional and physical anguish that followed, but even more, it is about the power of the human mind and body to reverse a death sentence.

It is said that the only real experts on cancer are those who have suffered from it. They will tell you things that doctors won’t. On how to accept the presence of cancer in your life, for instance and how to conquer fear. On the real side-effects of chemotherapy and the precautions you should take. The Joy of Cancer addresses all these questions and more.

Written in the form of a guide, it enumerates a seven-point battle plan against cancer.

The basic premise of this plan is that survival is as much in the hands of the patient as the doctor.