In situations of uncertainties of life, many factors can make a difference.
Here is a beautiful story by the master story teller, O Henry which illustrate how hope of looking at the falling leaves and the not falling leaf gives a chance to recover. There is also a hidden message of sacrifice. Caregivers are so much a part of living with cancer. It is often their support/sacrifice along with HOPE that living with cancer becomes possible- Murthy.

The sketch is by Ms.Prasanna Mukundar, our Whats app group member.

Read the story, listen to the story and REFLECT on it. 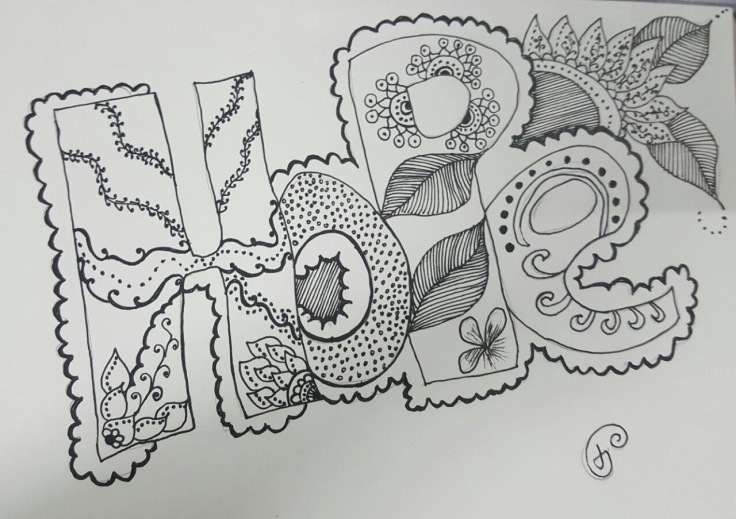 Our story today is called “The Last Leaf.” It was written by O. Henry. Here is Barbara Klein with the story.

Many artists lived in the Greenwich Village area of New York. Two young women named Sue and Johnsy shared a studio apartment at the top of a three-story building. Johnsy’s real name was Joanna.

In November, a cold, unseen stranger came to visit the city. This disease, pneumonia, killed many people. Johnsy lay on her bed, hardly moving. She looked through the small window. She could see the side of the brick house next to her building.

One morning, a doctor examined Johnsy and took her temperature. Then he spoke with Sue in another room.
“She has one chance in — let us say ten,” he said. “And that chance is for her to want to live. Your friend has made up her mind that she is not going to get well. Has she anything on her mind?”
“She — she wanted to paint the Bay of Naples in Italy some day,” said Sue.
“Paint?” said the doctor. “Bosh! Has she anything on her mind worth thinking twice — a man for example?”
“A man?” said Sue. “Is a man worth — but, no, doctor; there is nothing of the kind.”
“I will do all that science can do,” said the doctor. “But whenever my patient begins to count the carriages at her funeral, I take away fifty percent from the curative power of medicines.”

After the doctor had gone, Sue went into the workroom and cried. Then she went to Johnsy’s room with her drawing board, whistling ragtime.

Johnsy lay with her face toward the window. Sue stopped whistling, thinking she was asleep. She began making a pen and ink drawing for a story in a magazine. Young artists must work their way to “Art” by making pictures for magazine stories. Sue heard a low sound, several times repeated. She went quickly to the bedside.
Johnsy’s eyes were open wide. She was looking out the window and counting — counting backward. “Twelve,” she said, and a little later “eleven”; and then “ten” and “nine;” and then “eight” and “seven,” almost together.

Sue looked out the window. What was there to count? There was only an empty yard and the blank side of the house seven meters away. An old ivy vine, going bad at the roots, climbed half way up the wall. The cold breath of autumn had stricken leaves from the plant until its branches, almost bare, hung on the bricks.
“What is it, dear?” asked Sue.
“Six,” said Johnsy, quietly. “They’re falling faster now. Three days ago there were almost a hundred. It made my head hurt to count them. But now it’s easy. There goes another one. There are only five left now.”
“Five what, dear?” asked Sue.
“Leaves. On the plant. When the last one falls I must go, too. I’ve known that for three days. Didn’t the doctor tell you?”
“Oh, I never heard of such a thing,” said Sue. “What have old ivy leaves to do with your getting well? And you used to love that vine. Don’t be silly. Why, the doctor told me this morning that your chances for getting well real soon were — let’s see exactly what he said – he said the chances were ten to one! Try to eat some soup now. And, let me go back to my drawing, so I can sell it to the magazine and buy food and wine for us.”
“You needn’t get any more wine,” said Johnsy, keeping her eyes fixed out the window. “There goes another one. No, I don’t want any soup. That leaves just four. I want to see the last one fall before it gets dark. Then I’ll go, too.”
“Johnsy, dear,” said Sue, “will you promise me to keep your eyes closed, and not look out the window until I am done working? I must hand those drawings in by tomorrow.”
“Tell me as soon as you have finished,” said Johnsy, closing her eyes and lying white and still as a fallen statue. “I want to see the last one fall. I’m tired of waiting. I’m tired of thinking. I want to turn loose my hold on everything, and go sailing down, down, just like one of those poor, tired leaves.”
William Sydney Porter, or O. Henry sits for a portrait.
“Try to sleep,” said Sue. “I must call Mister Behrman up to be my model for my drawing of an old miner. Don’t try to move until I come back.”

Old Behrman was a painter who lived on the ground floor of the apartment building. Behrman was a failure in art. For years, he had always been planning to paint a work of art, but had never yet begun it. He earned a little money by serving as a model to artists who could not pay for a professional model. He was a fierce, little, old man who protected the two young women in the studio apartment above him.
Sue found Behrman in his room. In one area was a blank canvas that had been waiting twenty-five years for the first line of paint. Sue told him about Johnsy and how she feared that her friend would float away like a leaf.

Old Behrman was angered at such an idea. “Are there people in the world with the foolishness to die because leaves drop off a vine? Why do you let that silly business come in her brain?”
“She is very sick and weak,” said Sue, “and the disease has left her mind full of strange ideas.”
“This is not any place in which one so good as Miss Johnsy shall lie sick,” yelled Behrman. “Some day I will paint a masterpiece, and we shall all go away.”

Johnsy was sleeping when they went upstairs. Sue pulled the shade down to cover the window. She and Behrman went into the other room. They looked out a window fearfully at the ivy vine. Then they looked at each other without speaking. A cold rain was falling, mixed with snow. Behrman sat and posed as the miner.
The next morning, Sue awoke after an hour’s sleep. She found Johnsy with wide-open eyes staring at the covered window.
“Pull up the shade; I want to see,” she ordered, quietly.
Sue obeyed.

After the beating rain and fierce wind that blew through the night, there yet stood against the wall one ivy leaf. It was the last one on the vine. It was still dark green at the center. But its edges were colored with the yellow. It hung bravely from the branch about seven meters above the ground.
“It is the last one,” said Johnsy. “I thought it would surely fall during the night. I heard the wind. It will fall today and I shall die at the same time.”
“Dear, dear!” said Sue, leaning her worn face down toward the bed. “Think of me, if you won’t think of yourself. What would I do?”
But Johnsy did not answer.

The next morning, when it was light, Johnsy demanded that the window shade be raised. The ivy leaf was still there. Johnsy lay for a long time, looking at it. And then she called to Sue, who was preparing chicken soup.
“I’ve been a bad girl,” said Johnsy. “Something has made that last leaf stay there to show me how bad I was. It is wrong to want to die. You may bring me a little soup now.”

An hour later she said: “Someday I hope to paint the Bay of Naples.”
Later in the day, the doctor came, and Sue talked to him in the hallway.
“Even chances,” said the doctor. “With good care, you’ll win. And now I must see another case I have in your building. Behrman, his name is — some kind of an artist, I believe. Pneumonia, too. He is an old, weak man and his case is severe. There is no hope for him; but he goes to the hospital today to ease his pain.”
The next day, the doctor said to Sue: “She’s out of danger. You won. Nutrition and care now — that’s all.”

Later that day, Sue came to the bed where Johnsy lay, and put one arm around her.
“I have something to tell you, white mouse,” she said. “Mister Behrman died of pneumonia today in the hospital. He was sick only two days. They found him the morning of the first day in his room downstairs helpless with pain. His shoes and clothing were completely wet and icy cold. They could not imagine where he had been on such a terrible night.

And then they found a lantern, still lighted. And they found a ladder that had been moved from its place. And art supplies and a painting board with green and yellow colors mixed on it.

And look out the window, dear, at the last ivy leaf on the wall. Didn’t you wonder why it never moved when the wind blew? Ah, darling, it is Behrman’s masterpiece – he painted it there the night that the last leaf fell.”