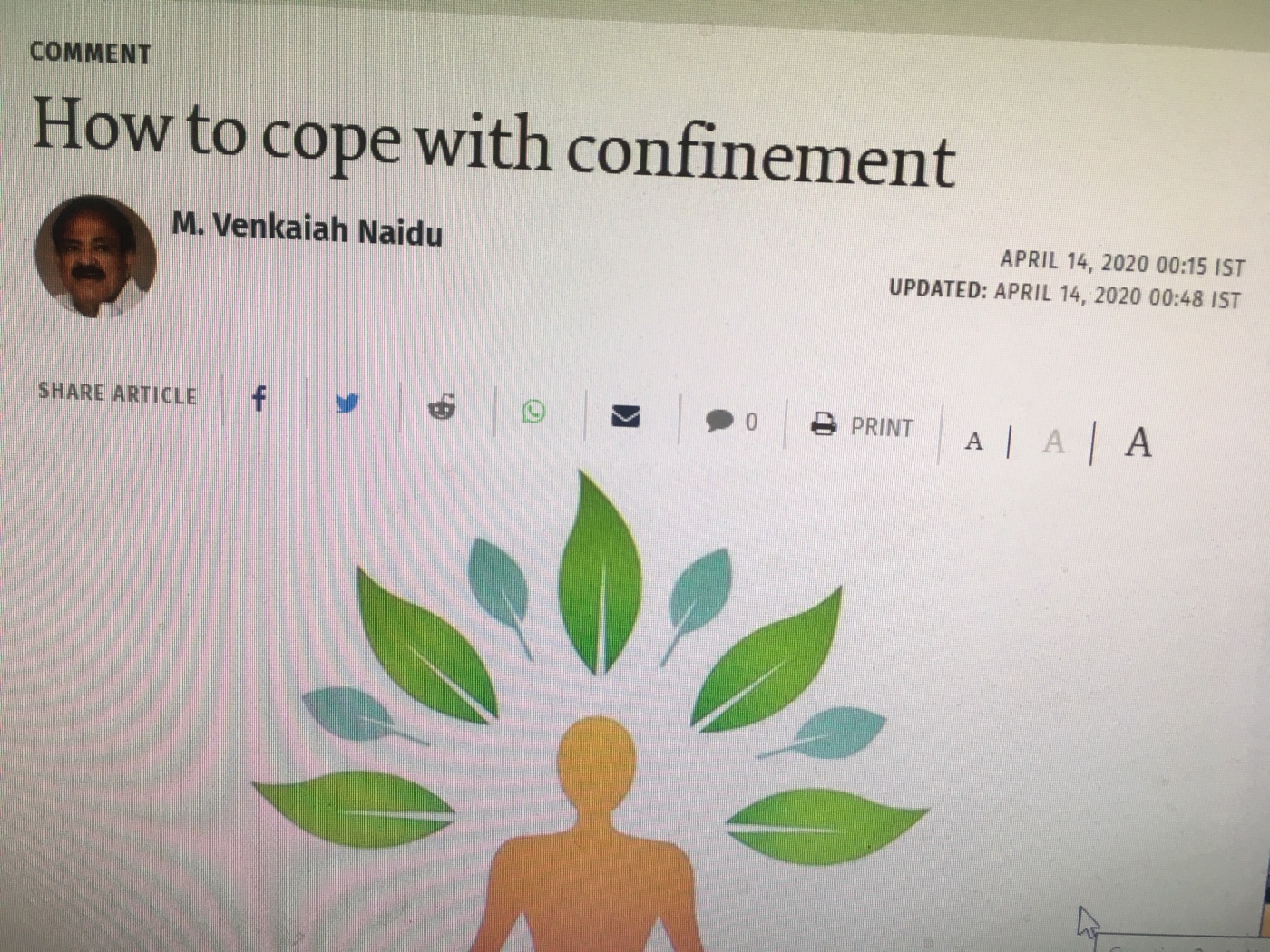 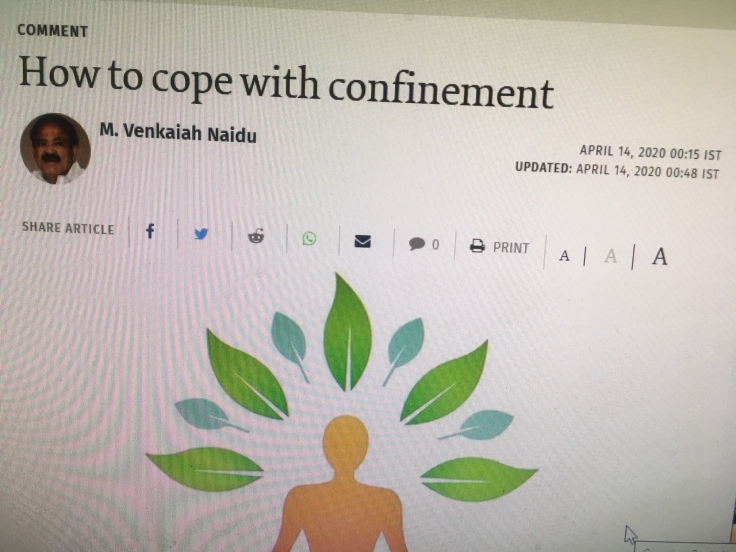 How to cope with confinement
M. Venkaiah Naidu
The Hindu April 14 2020

People across the world are under confinement in varying degrees. India has been under a national lockdown for three weeks now. This may continue for some more time as we battle with the novel coronavirus, an invisible organism threatening to claim large numbers of precious human lives.

While the virus is a challenge in itself, coping with such a long period of confinement has emerged as another challenge. How does one cope with it?

It is all in the mind.

Any new situation with socio-economic consequences demands of us suitable adjustments or adaptation. In essence, we need to reset our mind.

Adapting to confinement is not easy. It requires some resoluteness on our part, especially since human beings are social beings. We are used to racing against time, so surplus time is a challenge. But it’s not too difficult, as I have seen in the last three weeks.

Adjusting to a new reality

Prime Minister Narendra Modi, soon after announcing the national lockdown, said in a lighter vein that I would be among those who would find it hard to not move out of home. This is because Mr. Modi has been a witness to my hectic political life and journey over the years, including as Vice-President of India. Many of my friends too had similar concerns, as was evident in the fact that my landline and mobile phone ceaselessly rang after the lockdown came into force. They all enquired about me with some palpable concern.

That is why I’m sharing my experiments with the confinement.

I was also initially worried, but soon things fell into place. It didn’t require much effort and reordering of life, but a little retuning of the mind.

The guiding principle is to make the most out of this new reality, seen by many as an adversity.

A friend and former member of the Rajya Sabha, C. Narayana Reddy, in his Jnanpith Award-winning work Viswambhara, aptly said that everything is in the mind.

“For sainthood or for animal instincts; For good deeds and evil acts; For freedom or confinement; For compassion or cruelty, the first seed lies in the Mind. This is the core of universal philosophy and the eternal truth of life,” he wrote.

Mind is the set of cognitive faculties encompassing consciousness, imagination, perception, thought, judgment, language and memory.
Many of these faculties come into play while we cope with the present confinement.

We have to recognise a new reality, imagine the conditions of life that flow from it, and take decisions based on a rational consideration of this new scenario.

We also have to count the downsides and the takeaways from the situation. I have undergone this exercise, as have most of my fellow countrymen, and this has been evident in the successful implementation of the lockdown so far.

I have reasons to believe that we will collectively stay put in this new equilibrium of mind as long as it is required. We are now in a situation of life Before Corona (BC) and After Corona (AC).

My daily life BC would start with a game of badminton. This would be followed by a cup of tea peppered with ginger, turmeric and cinnamon while spending over an hour browsing English, Hindi and Telugu dailies. Then I would have breakfast; keep several appointments; do official work, which included looking at files; have meetings with lunch in between; go on outstation tours, which were not too few in number; attend the Rajya Sabha during the sessions; walk in the garden in the evening; and spend some time with family in person or over the phone.
After Corona

My life AC continues with most of these elements except visits to different parts of the country, which I love, and the morning game of badminton at the Constitution Club, which has been substituted by yoga. Office work has been re-prioritised, with most of the officials working from home as required.

The surplus time has resulted in some dividends for me as I have reset my mind. The foremost of these is that my wife and I are spending the longest time together since our marriage in 1970. This privilege was precluded by the demands of my political life all these years. This long togetherness has further strengthened our bond. Both of us are savouring the fragrance of this bonding and finding new virtues.

My inquiries have revealed that this is the case with many of my friends and well-wishers.

I have also been spending a good deal of this new-found time in reaching out to a large network of friends from school and my village days inquiring how they are coping with the situation and sharing my own experiences with them.

As a keen learner of our parliamentary democracy, I have been able to revisit some of the illuminating debates in the Constituent Assembly and by some luminaries in our Parliament post-Independence. This has been a delight.

My native district of Nellore in Andhra Pradesh is one of the worst affected by the spread of COVID-19, as some attended the Tablighi Jamaat congregation in Delhi. I have been regularly in touch with people from the villages and urban centres of this district closely monitoring the situation and rendering necessary advice.

I have been interacting with several former veterans and colleagues in public life and those in the forefront of the current battle and sharing their feedback with the Prime Minister and others. I have also spoken to several Governors twice in the video conferences held by the President on preparedness in respective States, and flagged concerns, particularly those relating to the farm sector.

I have been relishing the kirtans of the renowned Annamacharya in praise of Lord Balaji and savouring old film songs pregnant with messages of life and love.

I have lent my bit to the ongoing efforts of reaching out to people about the causes and consequences of COVID-19 by publishing articles in Hindi, English and regional language dailies.

I have urged them not to panic but also to not throw caution to the winds. I have urged all those concerned to draw the right lessons from the crisis both in terms of our present lifestyle and norms of international cooperation before another such challenge stares at us.

Closely following what is circulating on social media about the virus, I have put out several messages based on the findings of the World Health Organization and the Indian Council of Medical Research, and official announcements, advising people not to believe fake information and superstitions and not be prejudiced.

I have also been inquiring about the way millions of our students are coping with the disturbance in their academic calendar. I hope that order will soon be restored in this regard.

I have regular exchanges with all those concerned in the Central and State governments on the spread of the virus and the direction of our admirable collective fight.

I find that time is inadequate for me in life AC as it was BC. As long as one finds shortage of time, it is a life well-lived. When it is the case with fellow countrymen resulting in a larger sub-conscious mind guiding our thoughts and actions for larger collective good, we are on course to emerge victorious against the virus.

M. Venkaiah Naidu is the Vice-President of India